Can you blog yourself out of debt? It turns out that a blog could be a great tool to help you reach your financial goals. Starting a blog can work to bring in extra income and help you remain accountable to your goal and audience.

Studies show that you are 42% more likely to accomplish a goal if you write it down. Research also confirms that having an accountability partner or group greatly increases your chances of accomplishing goals. Workplace strategy expert and researcher, Leigh Stringer summarizes the findings of Dr. Robert Cialdini, a well-known social psychologist, in regards to positive peer pressure:

1) Peer pressure is powerful, especially when the decisions we are making are complex or ambiguous, and 2) the closer we are to the person or group we are comparing ourselves to, the more likely we are to be influenced by them.

Is it any wonder that you can start a blog then use it to dig yourself out of debt? Pair mass accountability with extra income from blogging and you’ve got a proven formula for debt-destroying success.

Let’s take a look at some “real people” who accomplished this seemingly impossible goal with a little ingenuity, creativity, and consistency.

Michelle started out as an anonymous blogger who simply wanted to chronicle her journey to pay off $40,000 in student loans. That was in 2011. As she wrote about the process of taking on extra work as a freelance writer, earning income from her website and other VA activities, her audience became hooked on her debt repayment updates.

They saw her tackling her debt in real time plus all the ways she hustled to make it happen. People were inspired and rooted her on at the same time. Not only did she become debt free but she has since grown her blogging empire to $100,000+  in income per month. Recently, she started teaching others how to do the same with her affiliate marketing course. I’d say her accountability blogging strategy definitely worked!

Related resource: Start a blog for just $3.95 per month (send your receipt to aja [at] principlesofincrease dot com for a free set-up tutorial.)

Stephanie Jones of Six Figures Under

Stephanie and her husband paid off over $144,000 of debt. She says that blogging about debt is a great accountability tool. Most of her family’s debt was student loans from her husband’s business and law school degree.

Stephanie started a blog as a way to show people the numbers on their accelerated repayment schedule. Those reports included a detailed budget with line items for extra income and extra debt payments. Along the way, she inspired many people with her frugal living tips and ideas on adding more income to the pot. But Stephanie’s rationale for doing this?

For most people, the idea of sharing the taboo numbers of earning, spending, and debt is just plain crazy.  Well call us crazy, ’cause that’s what we’re doing!  And honestly, we’re loving it and we’re so glad we decided to.

If you want more details on how her family paid off this crazy amount of debt you can read about how Stephanie paid off that six-figure debt here.

Get the Tools You Need to Start Your Blog

Melanie is truly a “she-roe” of mine. She decided to pursue her dream of earning an advanced degree at NYU. It wasn’t long after graduation that she felt the stunning aftershocks of racking up debt to cover her tuition. Between that and her undergraduate degree loans, she amassed over $80,000 in student loan debt!

Even more heart-breaking? Melanie had the darndest time finding stable employment after graduating. After shaking off the despair, Melanie started budgeting ferociously and side-hustled nonstop to make ends meet. The bonus was all this greatly accelerated her debt repayment.

As part of her accountability journey, she also started a blog, DearDebt.com, to document her progress. Her writing got the attention of editors and her freelance writing career blossomed. The freelance writing income flowed in and allowed her to make even more progress on paying off debt.

Jessi’s family has paid off over $55k in debt in two years! This amount doesn’t even include the mortgage they’ve also been paying extra on. In fact, the Fearon’s are on track to pay her home off their home by the end of 2017.

Jessi and her husband will have paid off their home in six years! Jessi has a few secret weapons that have allowed her not only to make huge financial strides but also do it as a stay-at-home wife: 1) Her super-duper ultra powerful budgeting skills 2) the extra income she brings in as a blogger. Jessi teaches her method of rapid debt reduction in her online class: Real Life Money Plan.

Amanda Page of Dream Beyond Debt

Amanda’s “about” page tells you all you need to know about her debt free journey,

Hi, I’m Amanda. I’m a college professor who paid off $47,554 of student loan debt that I carried around for a decade. It took 14 months to pay it off. I believe that once you figure out your money, you can achieve your dreams.

Amanda has an entire page on her website (with detailed posts if you decide to drill down) dedicated to showing people her repayment schedule. It’s actually pretty amazing and a testament of the hustling spirit. Amanda also goes into detail around her budget (and how her expenses were so low) along with the side-hustling she did to increase her income. Now that’s she’s out of debt, she focuses on saving and preparing for financial independence.

Related Content: How to Start a Blog (Free Tutorial)

Just a few years ago Lauren was in over $40,000 of debt, had an underwater mortgage and was cash-flow negative to the tune of $1,000 each month! Lauren got a hold of her finances by first attacking her food expenses. Through meal planning, couponing and going on a cash-only budget, she got her food spending down to as little as $50 per week. Lauren began to teach others how to do the same in classes and workshops. Eventually, the demand for her knowledge lead her to start a website about couponing, budgeting, meal planning and general home money management. Lauren’s website, I am That Lady began to generate a six-figure income and helped her pay down her family’s debt. This additional income also allowed her husband to come home to help run the business and their home. Check out my interview with Lauren Gruetman here along with her best-selling book, The Recovering Spender.

Steven of Even Steven Money

Just a few years ago, Steven was in a mountain of debt. In fact, he was in over $100,000 of debt. Steven made some drastic changes to fix his financial mess. He traded in his part-time gigs for a full-time job, married to up his income (but of course the primary reason was for love) and started a blog as an accountability tool.  Eventually, Steven paid off all his consumer debt, PLUS a mortgage on a rental property. He is now working on paying off his primary residence.

Steven credits his financial habits like budgeting and doubling down on debt payments for his success. He’s a big fan of the Dave Ramsey method of debt repayment outlined in the New York Times bestseller, Total Money Makeover. Steven continues to document and update his journey to financial freedom on his blog, EvenStevenMoney.com. I’m pretty confident that we will soon be reading about Steven’s early retirement!

Get the Tools You Need to Start Your Blog

This power-couple started off with $240,000 in debt in November 2015. Fast forward a year later, they sold their 1,500 square-foot house and have paid off over $16K in credit card debt. They’ve also drastically reduced their lifestyle by purging tons of belongings and moving into a tiny house. What’s even more impressive is that they paid off the $69K mortgage on that tiny home in just 13 months! Embracing their principles of

frugality, minimalism, and side-hustling to pay off debt, they continue to dig out of debt and update their blog audience on their debt repayment progress.

Melody and Marcus have been blogging about getting out of debt since March 2015. They currently have over $212K worth of debt they are working to pay off. To date, the Wrights have paid off $57K in 18 months. The Wrights call this radical debt repayment process being “Broke on Purpose. ” Melody posts monthly debt payoff reports every month on the LiveBrokeOnPurpose blog, reporting the couple’s repayment progress. The reports are so inspiring and motivating!

Tabitha’s family had a doozy of a financial situation going when she and her husband filed for bankruptcy. What’s more is that they actually paid on the bankruptcy for three whole years, then backed out and had to start their debt repayment all over again!

When the family started making financial changes to dig out of this six-figure debt, Tabitha started couponing and deal hunting. Tabitha’s knowledge was so helpful she started several websites including MeetPenny.com which focuses on household management and family finance. This website along with others brought in enough income so that her family could pay off all their debt. Today they are debt free and thriving!

Tracie and her husband were once in over $35,000 of debt. The kicker was that Tracie wanted to be a stay-at-home mom. The problem was that their family couldn’t afford to lose Tracie’s salary, or so they thought.

Tracie started couponing, deal hunting and tightened the family budget in order to pay off debt. In the process, her website earnings from Penny Pinchin Mom contributed to paying off all their debt. This is another example of teamwork, sacrifice and creativity for the sake of leaving an inspiring financial legacy.

If you want to check other bloggers with similar stories, here are a few more honorable mentions:

Are you interested in super-charging your debt freedom journey with a blog? Check out my FREE “Start a Blog” tutorial and resource PDF that will give you all the tools so you can get started DESTROYING your debt today! 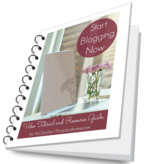 Enter your information to get instant access to your ***FREE*** 5 video tutorial on starting a blog along with a resource guide.

More from my site

Hi! I’m Aja, the founder of Principles of Increase. Our family dumped over $120,000 in debt back in 2013. I got so many questions about it, that I decided to start this site. Here, I talk about taking control of your money and how to live a better life in general. I’m glad you are here! More about me…

Disclosure: Principles of Increase contains affiliate links and receives compensation for product reviews. Aja McClanahan is also a participant in the Amazon Services LLC Associates Program, an affiliate advertising program designed to provide a means for sites to earn advertising fees by advertising and linking to www.principlesofincrease.com.This website is for entertainment and informational purposes only. Seek a financial advisor for guidance pertaining to your specific money issues. To access our privacy policy, click here.